Tomorrow is the first day of the II 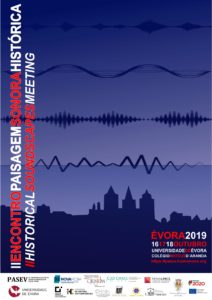 Historical Soundscapes Meeting – Évora 2019, that will take place at the University of Évora from 16-18 October. It is an event organized by project PASEV (Patrimonialization of Évora’s Soundscape, 1540-1910) in which I am a team member.

I will be presenting a paper tomorrow afternoon at the session “Ritual and Music”, titled ” The Novena for the Feast of S. Joseph by Pedro Vaz Rego and the musical activity in Évora Cathedral during the first half of the eighteenth century”. It focus on a devotional work by Pedro Vaz Rego (1673-1736, chapel master at the Cathedral from 1700-1836), which is an unusual work in the Cathedral’s music archive from this period, its organization and structure, and the relations to the Cathedral and its music chapel activity, regarding the attendance of the Cathedral Chapter, and the introduction of new instruments in the music chapel, notably the violin.

Friday (18) afternoon I will be given a guided tour title “Some spaces of music in Évora”, which will feature some not so well known streets and spaces where music could be found (?) during the seventeenth and eighteenth centuries.