The project PASEV – Patrimonialization of Évora’s Soundscape (1540-1910) is organizing a concert tomorrow 29 May, 18h00 in the magnificent Church of São Francisco, Évora. Capella Patriarchal, directed by the organist João Vaz, will present a setting titled Noa para a festa da Ascensão which comprises psalms, hymns and other works that make the ninth hour of the Office destined to the Feast of the Ascension.

This setting was composed by Joaquim José da Rocha Espanca (1839-1896) a local composer active around the nearby Vila Viçosa throughout the nineteenth century. There will be other works for organ interspersed with the vocal works of Espanca.

Historical soundscapes project PASEV (in which I’m a participant researcher) is reviving this repertory as a premiere in modern times, part of the various studies focused on the sacred music of the nineteenth century, lesser known than that of the sixteenth or seventeenth centuries in the Évora region. 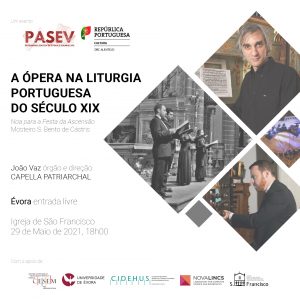